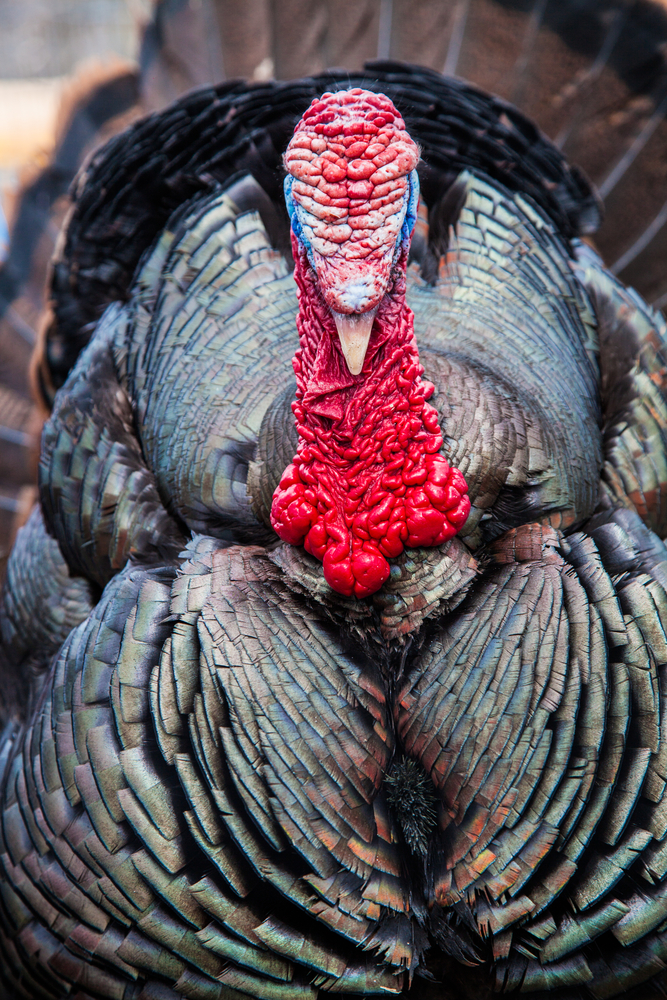 With their excellent eyesight and keen intelligence, wild turkeys can be quite challenging to hunt.

As with some other bird species, adult male turkeys (Toms) are generally larger and more colorful than their female counterparts (Hens). They sport a patriotic color scheme of red, white, and blue on their heads and necks.

Many male turkeys grow impressive spurs on the back of their legs. Older and more dominate males tend to have the longer and sharper spurs; good for fending off the younger competition vying for mating females. Also, characteristic of older, healthier males are longer beards.

The two species of wild turkey include the American Wild Turkey with its five subspecies and the Ocellated Turkey which is native to Central America.

In the United States, wild turkey can be found every state except Alaska. The most abundant subspecies is the Eastern Wild Turkey, which can be found in 38 states and a number of Canadian provinces. Gobblers average about 17 pounds with some birds weighing up to 25 pounds. Hens average between 8 and 11 pounds.

We, here at Simmons Sporting Goods, are particularly fond of this subspecies as it is the largest game bird native to our home state of Louisiana.

Other American Wild Turkey subspecies include:

Although, in kid’s books and general conversation, we often hear “gobble, gobble, gobble” associated with turkeys in general, the males are the actual gobblers. They use this sound particularly well, or at least think they do, in the spring during mating season to let the hens know they are the neighborhood.

This sound is often used by turkeys to get the attention of one another. For example, a hen might use it to answer the gobble of the tom.

Basic turkey talk also used to communicate position and information, as well as willingness to interact.

The National Wild Turkey Federation offers some good audio clips of these sounds to listen to.

What Makes For A Good Wild Turkey Habitat

Wild turkeys like to hang out in areas that offer access to trees, grasses, and water sources. Trees offer the turkeys good places to roost and at their bases, great places to forage for chow. Grasses provide protection from view and excellent sources, as well, for the insects, seeds, and vegetation that they so love.

Turkey habitats can be found on both private and public lands.

Some states offer turkey hunting for specific periods during the fall and spring and some just the spring which is the mating season for these birds. Please check with your state’s Wildlife and Fisheries Department to get information on seasons, license requirements, and all rules and regulations.

How To Prepare To Turkey Hunt

Once you have gotten your proper license and secured the legal areas where you plan to hunt, you can prep by securing the proper gear that you need and then practicing with that gear in safe locations. For example, practice shooting your firearm at a licensed gun range.

Also, review (and review again) hunting safeguards. Cardinal rules include knowing where your hunting partners are at all times. And never pulling a trigger or letting an arrow fly unless you are sure of your target and that the bird is clear of others. No turkey is worth anybody getting hurt.

Also, look for an experienced turkey hunter to mentor you as you get started. And, please note that here at Simmons Sporting Goods, we eat, sleep, and breathe hunting. We will be glad to help you pick out the right gear for you and offer insights only seasoned wild turkey hunters can provide.

Get lots more of our Turkey Hunting Tips.